:: Disclaimer - the intent of this post is for educational and research purposes only.  Don't be lame and use it to steal copyrighted material ::


There's been quite a bit of chatter lately with the recent discovery of the latest IE 0-day.  While reading through one of the other researchers posts I decided to take a deeper look into some of the files being used in these reported attacks.  The issue that some might be experiencing while trying to analyze the related flash files, as did I, is that they're encrypted with doSWF and therefore take a little more effort in order to get down to what we care about.  A quick search about how to go about decrypting this particular type of encryption led me two good articles (one | two).


With the addition of another user posting a decompiled version of the ActionScript within the file I was looking at I decided to give a quick look into this referenced script and modify its 'decrypt' function to correspond with the information provided.  I thought it would be an easy task but later turned out to result in errors - Java is something I don't care to debug... The thought of having a script to aid in the future automation of decrypting such files would be helpful and might be re-visited but there's also a learning aspect to doing it manually.  With that being said I opted to go about it in a different approach (attaching OllyDbg to IE and dumping the SWF from memory) which would be repeatable in future analysis efforts even if the type of encryption used was different - which makes it more reliable/flexible in my eyes.  There will be some overlap here to previously linked posts but instead of just saying what was done I feel it's useful for others to see how to do it.


So after wiping off the dust from OllyDbg I was able to get the end results I was seeking from my analysis by performing the steps outlined below.  Note that while some of the steps and content below are specific to the file I set out to analyze, other steps can be applied to help analyze other situations you might encounter.

There may be multiple hits of the text you are searching for - each of which will pop up in its own 'Dump' window.  Take a look at the context of where the found text is located and continue (CTRL + L) until you get one that looks like it's right.

...or have a tool help you out.  While it's useful to know the specifications of what you're analyzing, having a tool to help you limit the chance of you creating an error is always nice so I opted use Alexs' kick-ass tool xxxswf to do the thinking and lifting for me.

No matter how you go about it, once you've successfully carved it out you should now have just the unencrypted SWF you can continue your analysis: 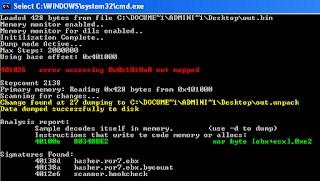 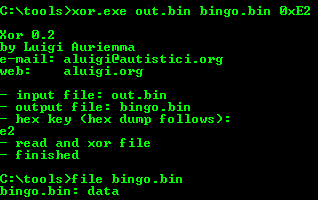 A quick test of determining what the actual file is (shown in the second command above) after being reversed shows it's just 'data'.  Hm, it doesn't appear to be what I'd expect as a result of the shellcode or did something fail when performing the XOR?  If we view the strings of this data we see it displays a link to a file which could indicate a 2nd stage download: 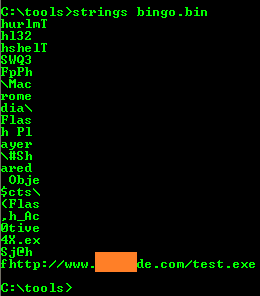 You can continue your analysis as needed from here but for the purpose of this post hopefully this showed you a thing or two that you either previously weren't aware of or was causing a road block in your analysis efforts.  As always, there are many ways to accomplish the task at hand and if you have a more efficient way to accomplish what I've touched by all means pass it along.
Posted by hiddenillusion at 1:25 PM